Did you know that General Washington made Thanksgiving an official holiday in 1777, long before Lincoln made it our national holiday in 1863?  Both men wanted to thank God for His blessings on America since 1620, but what about you?  What are you the most thankful for on this Thanksgiving?

For me, it’s doing nothing.  Let me explain.

With a Catholic father and an Episcopal mother I had a good religious foundation, but I thought forgiveness depended on my efforts.  If I did more good things than bad things, then God would let me into Heaven, kind of like a cosmic scale weighing out my life choices.

I was wrong.  Doing something for God to balance out my sins was delusional.  Imagine a contagious leper offering you a gift. Two examples show that we can do nothing to earn God’s favor.

The General’s uniform in the Smithsonian

Remember what Jesus said to the thief crucified with Him in Luke 23? “Today you will be with Me in Paradise.”  What good works could he do in those final minutes to outweigh a lifetime of sins?

And the adulterous woman about to be stoned in John 8 (above) when Jesus said to her, “Neither do I condemn you.” What good works could she do in those few minutes to outweigh a lifetime of sins?

When you compare your works against His holiness, then we’re all goners, as Isaiah 64:6 says, “…all our righteous deeds are like a filthy garment (which in Hebrew is likened to a menstrual cloth).”  Our best is worthless.

So what did Jesus write in the dirt?  Perhaps it was the name of the prophet Hosea’s wife.  She was a harlot too, but God told Hosea to marry her, symbolically depicting Israel’s unfaithfulness to God.  Later on, she was redeemed and brought back to her husband. Her name was Gomer, which means, “complete” in Hebrew, and coincidentally Jesus’ last words on the cross, “It is finished (or complete).” 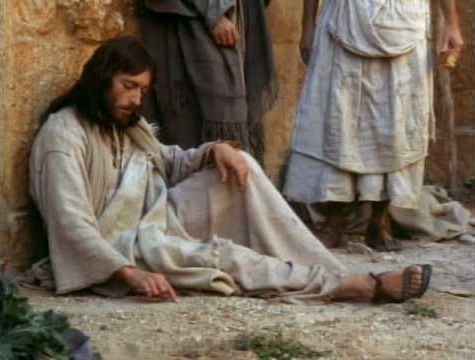 What did He write?

Admitting that my sin separates me from God is the first step, guilty as charged (Isaiah 59:2), and that my salvation depends on what He completed on the cross––only His bloody sacrifice cancelled my debt (Colossians 2:13-14).  Nothing else.  My cosmic scale is demolished.

Like the adulterous woman and the dying thief, we’re all criminals, but as Ephesians 2:8-9 says, doing nothing is the key, “…by grace you have been saved through faith; and that not of yourselves, it is the gift of God; not as a result of works that no one should boast.”  You don’t work for a gift; you just receive it (John 1:12).

The Thief on the Cross

This takes humility to do nothing, to admit guilt, and simply surrender, but that’s what a Gomer is…a desperate harlot or a convicted thief, helpless, only complete by His work on the cross (Galatians 2:16-21).

So on this Thanksgiving I’m most thankful for being a Gomer, one brought back to her husband who could do nothing to be redeemed from my harlotry, but no longer a Goner.

The adulterous woman and Jesus

“…yet we know that a person is not justified by works of the law but through faith in Jesus Christ, so we also have believed in Christ Jesus, in order to be justified by faith in Christ and not by works of the law, because by works of the law no one will be justified.  But if, in our endeavor to be justified in Christ, we too were found to be sinners, is Christ then a servant of sin? Certainly not!  For if I rebuild what I tore down, I prove myself to be a transgressor.  For through the law I died to the law, so that I might live to God.  I have been crucified with Christ. It is no longer I who live, but Christ who lives in me. And the life I now live in the flesh I live by faith in the Son of God, who loved me and gave himself for me.  I do not nullify the grace of God, for if righteousness were through the law, then Christ died for no purpose.”

The Book of Hosea explained