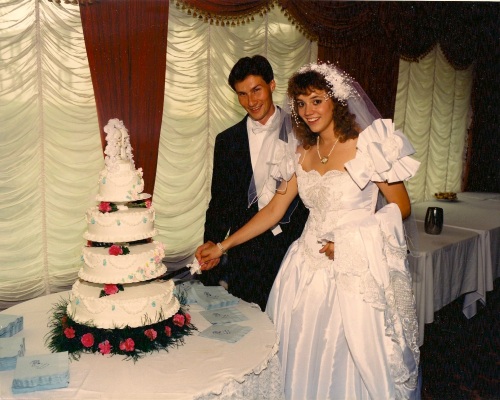 The Wedding in Reading!

And again Jesus spoke to them in parables, saying, “The kingdom of heaven may be compared to a king who gave a wedding feast for his son, and sent his servants to call those who were invited to the wedding feast, but they would not come (Matthew 22:1-3).”

Almost 30 years ago, I sent Bob Dylan an invitation to our wedding, and just like the guests in this parable, my hero didn’t come. Despite that snub, inspired by a Dylan song called, “The Groom’s Still Waiting At The Altar,” I wrote this for the back of our wedding program for those who did come:

Zimmy, after he got engaged (gave his life to his Messiah)!

Well, it’s hard to believe that our wedding day is finally here! We’ve been looking forward to this day (and sharing it with all of you) for a long time. Excitement, anticipation, and joy are just a few of the emotions that we’ve been experiencing in thinking about our wedding day. The day that I am finally united with my bride, and she with me! But even more important than our wedding day is another wedding day that we’d like to invite all of you to now.

This wedding is a very special one because it is a wedding that is being arranged by God and everyone is invited. It says in the Bible that Jesus Christ is the groom and that the bride will be everyone who accepts His proposal. This very unique couple will one day be united forever in Heaven, but only those people who choose to respond can be His bride. When I asked Amy to marry me, it was then up to her to decide whether or not she wanted to choose to enter into that commitment with me. It wasn’t until she did accept my proposal that we could get to the point we are at here today.

In the exact same way, each of you must consider Jesus’ proposal. “Proposal?” you may be wondering. “When did Jesus ever propose to me?” Well, He said it a long time ago, but more important than what He said is what He did. Jesus demonstrated His own love toward us, in that while we were sinners, Christ died for us. That was His proposal, one of action. In the same way, through our action, we must respond to that sacrifice by accepting Him as our groom.

Several years ago, Amy and I both decided to accept His proposal of love. Since then, we have both been anxiously awaiting the day that we are united with Him as our groom. As you watch our ceremony today, we’d like you to think of the wedding that is yet to be in Heaven. We’d like to see all of you there too, but that is your own personal decision. After all, that’s precisely what love is, a personal choice.

Thanks for sharing this wedding with us. Hope to see you at the other one too.

So the next time you go to a wedding, think about His proposal to you, but realize He won’t wait forever. Eventually, there will be a wedding with or without you, just as ours was… without Bob Dylan (Revelation 19:7).

Off to the Bahamas!

In Hebrew it’s called “lekh-l’kha” or “lech lecha.”  This was the famous “call” to a 75-year old man named Abram to leave his home in Ur of Chaldees and to go to an unknown place, a place that God would show him, as recorded in Genesis 12:1-3,

“The Lord had said to Abram, ‘Go from your country, your people and your father’s household to the land I will show you. I will make you into a great nation, and I will bless you; I will make your name great, and you will be a blessing. I will bless those who bless you, and whoever curses you I will curse; and all peoples on earth will be blessed through you.’”

Eliezer, the servant of Abram

And so the Hebrew nation was promised, and so it began with a man who was told to leave Mesopotamia (“between the rivers”), his home in the wealthy city of Ur with almost 25,000 people, for Canaan…what would become Israel. Abram obeyed God and left, not knowing where he was going, but by faith he believed God (Hebrews 11:8).

Today, within a two-hour walk of where Abraham is known to have settled, you can meet Abraham again in the heart of the Judean desert, at a place called Genesis Land.

Genesis Land is a time machine that transports you back to around 2000 B.C. to Abraham’s tent, where the famous hospitality of the desert is in full force as we see in the Bible when Abraham has three guests visit him (Genesis 18:1-8). This land is a harsh place and a good host was obliged to provide food, water, and shelter (sometimes this was a matter of life and death in an arid land like Judea). Abraham even bowed to the three strangers which may seem strange to us, but it was typical desert hospitality, as was washing their dusty feet (John 13:1-6).

After a welcome introduction from his servant, Eliezer, you are robed and invited to break bread with Abraham in his tent (a full meal with six fresh salads, breads, beef kabobs over yellow rice, date honey chicken, dried fruit, and tea or coffee).

Two at a time!

While you enjoy this scrumptious feast, Abraham himself welcomes you to his home and explains how he came to be here. The re-enactor, Josh Goldsmith, does a masterful job of portraying the Father of the Jews and oozes hospitality (Hebrews 13:2). He really connects with you and you get the distinct feeling that you are his dearest friend. This is the essence of the shepherd tent hospitality so famous in the Scriptures (Exodus 2:20).

After this very satisfying meal and a truly pleasurable time with Abraham (who makes you feel like a prince), it’s time to leave…by camel!

One of the must-do things when you go to Israel is ride a camel, and here at Genesis Land you are given the opportunity to do just that. It’s just one more thing that reminds us of the rich heritage that Israel has had over the centuries as a welcoming land to strangers, as Josh puts so succinctly,

An experience at Genesis Land is intrinsically inspiring because it brings the Bible to life in the actual setting of our ancestors. Sharing the power of Abraham’s hospitality ismething people can relate to themselves and translate it into their own lives. The world would likely be a better place if we spent more time sharing each other’s company.”

Josh “Abraham” Goldsmith and a friend

Amen! And doing it over a hot meal in a cool tent, and later on a warm camel, makes it all the more enjoyable. Be sure to stop in to visit with Abraham while you are in his land of the Bible. It’s guaranteed to be a refreshing stop that you’ll never forget on your own lech lecha!